As a same sex divorce lawyer in Orlando representing those in the LGBT community, we begin by praising our State for recognizing the legality of Same-sex marriage and same sex divorce in Florida. Ensuring all people have equal rights under the law is a foundation of our democracy. Nobody should be excluded and denied legal rights. This recent change in Florida law occurred because of the Brenner v. Scott case where the Court declared Florida’s ban on gay marriage unconstitutional (a complex ruling, which is appropriate given that gay marriage has historically been a controversial issue). Brenner v. Scott directly applies to same sex divorce in Florida. Locally, gay divorce Orlando is being litigated in the courts, and family law litigation gay divorce is well-underway for many spouses seeking a dissolution of marriage, adoption of children, and most importantly, equal protection and fairness under the law. Equal protection and fairness are constitutional rights that directly impact gay divorce in Orlando and our entire country. Call us at 407-335-8113 for a consultation regarding your rights. We will be happy to speak with you!

As a same sex divorce attorney in Orlando Florida, it is hard to predict how courts will rule on same sex marriage cases, but we can look at case law precedent and emerging trends for guidance. What is apparent is that same sex marriage in Florida is not always treated as conventional marriage has been historically litigated. The Florida Legislature (applies to gay divorce Orlando) has not changed the rules to apply differently to same sex couples on the basis of their identification, and yet there appears to be some unequal application of the laws. This is why our approach to same sex divorce in Florida mirrors our approach to other dissolution of marriage cases, with some important and unfortunate exceptions as will be discussed below.

One of the most unfortunate setbacks many mothers face is that the laws on gay divorce and timesharing are unbalanced and have not caught up with modern trends. If two lesbians are unmarried, generally, only the biological mother has rights to be the legal parent of the child. An adoption proceeding can save the non-biological mother a great deal of heartache. If you are the non-biological mother of children in a gay divorce Orlando, call the Jacobs Law Firm for the guidance you need in seeking an award of custodial and timesharing rights through litigation. We have litigated cases for non-bio moms that are seeking timesharing rights with their children.

Same sex divorce litigation brings unique and distinctive facts, as does any other marital dissolution case. The facts of each unique divorce proceeding are singular. A same sex divorce lawyer Orlando Florida must exercise meticulous attention to detail. Gay divorce Orlando is a topic that in all fairness deserves broader research. One way to assess this burgeoning and IMPORTANT topic is by researching the divorce rates and adoption rates within the LGBT community. This may help us gain insight into patterns of marriage and divorce that could assist the legal community in better serving its clients during this traumatic time in their lives. 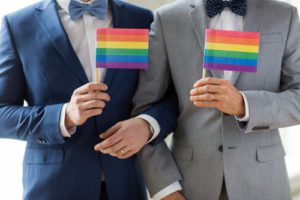 According to a Pew Research Center poll on public opinion regarding gay marriage, in 2017, a majority of Americans (62%) declared their support for same sex marriage, while just 32% opposed, and the number of those in favor according to USA Today seems to be inclining. As a same sex divorce attorney in Orlando, it is encouraging that public support for equal protection under the law is ostensibly growing. Recall that Florida is a no fault divorce state.

Gay divorces in Orlando can also be uncontested. Just because same sex divorce issues are rather unique and novel does not mean that every case needs to be contested. Another major issue gay couples with children encounter is that one party may want to relocate with the children after separation. Relocation cases are generally litigated until trial.

If the same sex marriage couple have children together through adoption or with the assistance of a fertility physician, their parental rights are likely the same (meaning there is no addition or subtraction of rights) as heterosexual couples. With a gay divorce Orlando, when children are involved, same sex divorce issues will need to include a parenting plan that satisfies certain minimum statutory requirements. Jonathan Jacobs is a same sex divorce lawyer in Orlando proudly working to protect the rights of gay clients obtaining a same sex divorce.

What If I got Married in Another State When Florida Didn’t Recognize Same Sex Marriage?

To answer this question, a same sex divorce lawyer in Orlando Florida will look to the Full Faith and Credit clause of the Constitution for guidance, as well as to the Due Process and Equal Protection clauses. A seminal decision in same sex marriage law in Florida provided another answer to a critical question facing would-be gay divorcees. In Brandon–Thomas v. Brandon–Thomas, 163 So.3d 644 (Fla. 2d DCA 2015), the Florida District Court held that, in the context of a divorce proceeding, “the Full Faith and Credit Clause required Florida to recognize a same-sex marriage legally obtained in another state even though Florida law at the time did not recognize same-sex marriages performed in Florida”. Therefore, same sex couples pursuing a divorce in Orlando, Florida, who were legally married in other states, are eligible to petition for marital dissolution in our great State. This does not always apply to civil unions from other states. Generally speaking, Florida legislatively rejects the validity of civil unions from other states and may not have jurisdiction to hear those cases. 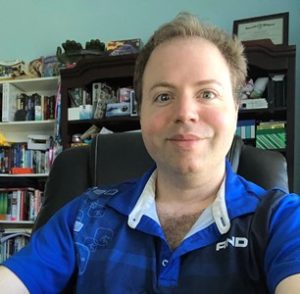 Same sex married couples are held to the same standards for establishing jurisdiction and causality in divorce. The basic jurisdictional requirements for obtaining a gay divorce in Florida are: one spouse must have been a resident of the State of Florida for at least 6 months prior to petitioning for divorce, and the same sex divorcees must allege their marriage is irretrievably broken. There are no special or additional requirements for same-sex spouses to divorce in Florida. However, if one spouse challenges the need for a divorce, a judge has the authority to order counseling to provide the parties with an opportunity to repair their marriage. This is why both parties should consider hiring a same sex divorce attorney in Orlando.

The Jacobs Law Firm, and Jonathan Jacobs (who is a same sex divorce lawyer in Orlando) represent clients from all backgrounds including in the LGBT community. A primary focus of our law firm is Gay Divorce Orlando.

A rare photo with my daughter while at Epcot Center on a Saturday!